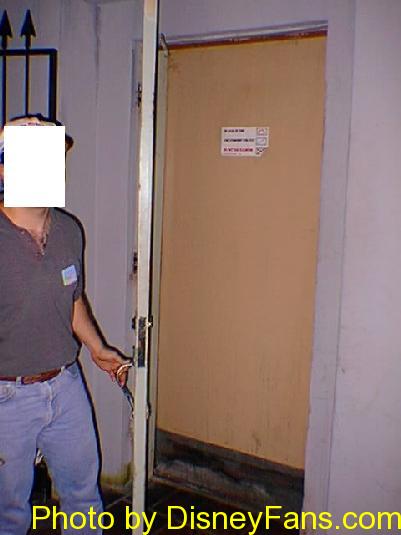 I’ve already touched on Disneyland’s New Orleans Square a bit when I discussed entertainment offerings in 1996, but let’s look a bit closer at some other things in the area.

Learning about Club 33 on the early Internet (long, long before Facebook, in the early stone ages of dial-up and text-based newsgroups) felt like being let in on a big secret. So of course I took a picture of the door!

As Club 33 became less of a secret, you’d see more and more people doing the same, or posing by it. I still kick myself for not going in when I had a chance. And kicking myself again for turning down the second and third chance, too. I think I was just too focused on rides back then.

And before the Year of a Million Dreams turned it into an apartment, upstairs above Pirates of the Caribbean was the Disney Gallery where you could see great things like this K7 spaceman outfit from the early years of Disneyland:

And, if you knew the right people (sigh, like those who invited you to Club 33 and you turned them down), they might even show you some other secrets, like this “hidden” cast member elevator:

I also got to visit a cast member store (which I think was located in a trailer backstage somewhere). I bought a strange black ball with Mickey ears on it that you could stick on a car antenna. Who would have known that, in a few years, those antenna balls would be a massive craze with hundreds of styles! (The one I bought was before this, and doesn’t even say “Disneyland” on it — just a discreet black ball with mouse ears. I’m not even sure if it had (C)Disney anywhere. I wonder if I still have it.)

I’ll share a few more. Somehow I learned about a “hidden pet cemetery,” and a cast member gave me a little tour. Today, it’s well documented (it was the original cemetery, and then a clone was made and moved out front when they expanded the Haunted Mansion queue), but back then, it seemed really special to get to see it. Funny how giving everyone a digital camera (on their phone) at all times makes having photos of things far less rare.

And over at Pirate’s of the Caribbean, I snapped a photo of one of the pirates unique to the Disneyland version. I believe he sat at the left of the “waterfall” up ramp at the end of the ride, just before where Jack Sparrow is today.

He disappeared a few years later during an update, and has been gone ever since. I think. I really need to check my later photos. I could be completely wrong (and I’m sure you’ll let me know if I am).

There was also some kind of big deal about turnstiles being moved to the exit of Pirates.  I don’t recall why, but I took a photo:

Oh, and for what it’s worth, back then this pirate was still looking for the woman that the clothing he was holding belonged to 😉

“I be willing to share, I be!” he would say, as an (apparently) nude woman popped up slightly out of the barrel behind him.

I guess that’s all for now. In writing this article, I did learn that the problem with strollers isn’t really a new one. It just seems today there are more of them, and more people bring their own, and they are larger. But even in 1996, I thought the mess of “parked” strollers was awful enough that I wasted one of my dozen or so photos on it.

Actually, maybe “parked” is too strong a word for that photo. How about “left in a clump, seemingly at random” instead?

Unless otherwise noted, all photos and content should be assumed Copyright (C)  1995-2018 by Allen C. Huffman. If you wish to use any content or photos form this site, please contact me.

Oh, hi! I got my first digital camera in 1996 and started documenting my Disney (-land and World) trips. I’ll be using this site to share photo essays of various things from the past. I’ll try to post something new every week until I’ve fully commented on the 150,000+ photos in my collection…